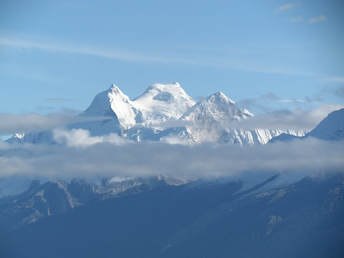 The department of Ancash is located in the north of Peru, due to its location it exhibits one of the most rugged geographical landscapes in South America, to the west it has a coastal strip, which is increasing vertiginously in an eastward direction, from 0 m at more than 6000 m of altitude.  The Western Cordillera of the Andes is the main responsible for this irregular physiography, according to Montario (2001) and Montario et al.  (2005) the rise of the Andes in this area of ​​Peru, happened between 6 to 2 million years ago approximately.  Two large mountain ranges are present in this area: “The white mountain range” and “The black mountain range”, the first one has snow-capped mountains, which exceed 6000 meters of altitude;  while the second has no snow-capped mountains and rises to a maximum of 5187 meters of altitude;  The geographical division between these two groups of mountains is given by the Santa River, this river has the highest flow of the Pacific Slope;  together the two mountain ranges and the Santa River form the Callejón de Huaylas, continued north by the Pato Canyon;  towards the east of the Cordillera Blanca is the Callejón de Conchucos, limited by the Marañón river basin.

The ANCASH MAMMALS project seeks to determine the species richness of mammals both in the Cordillera Negra and Blanca, understanding the various methods we can classify mammals into two groups, large and small, for large mammals, we will proceed with conventional methods, through tours in linear transects and installation of camera traps, for the case of small mammals, methods of capture lines, installation of nets, acoustic detection will be used.